My mom sent me a recipe for a crustless spinach quiche. Which I meant to make….but I went to the grocery store twice and managed to pick up everything but the spinach. Also, the recipe involves cottage cheese, which made me a little leery. Don’t be scared, it cooks down and melts in so that you never know it’s in there.  I substituted portabella mushrooms, artichokes and black olives for the spinach and made it healthier by chosing the healthier versions of some of the ingredients.  It turned out awesome. I ate it everyday for about a week and can’t wait to make it again.

Chop up whatever vegetables that you want in the quiche. I threw in about a pint of sliced baby portabellas, one jar of artichoke quarters(drained and roughly chopped), 1/4 cup diced onion and about 12 black olives(roughly chopped). 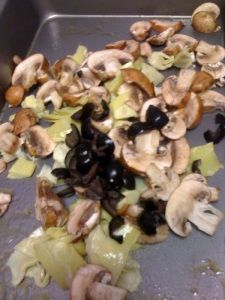 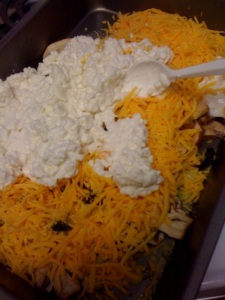 I also added in a little freshly ground black pepper, probably 1-2 teaspoons. Combine well and pour in to 9×13 pan. 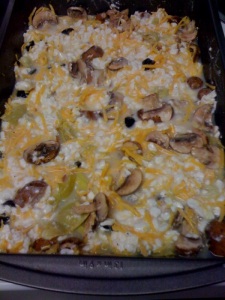 Bake in oven for 45 minutes or until set in the middle. Let stand for 10 minutes and cut into slices. Enjoy cheesy, eggy goodness.

Tell me what you think Cancel reply