Summer had officially arrived, then another cold front with lots of rain moved in, just as I was really getting into grilling. With hopes of good weather, I decided that shish kabobs were in order!

This marinade is delicious. I think I might start using it for most of my vegetables on the grill and it adds great flavor to meat.

Mix everything but meat and vegetables in a bowl/container. Not the prettiest picture, but you can see what the marinade looks like: 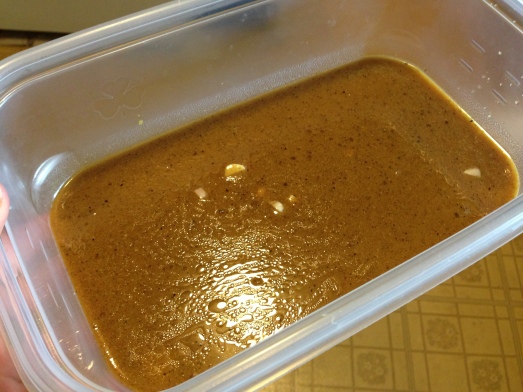 Pour half of the marinade over the meat(I used a thin cut sirloin). Half over the vegetables. For vegetables, I used portabella mushroom, onions, bell pepper, canned potatoes, tomato and zucchini. Mix/toss to coat well.

Let marinate for 4-24 hours. Stir/toss every few hours to make sure everything is soaking in the good flavors.  I like mine marinated closer to the 24 hour mark.

You can see that I added some pineapple into the mix. I would have marinated it with the vegetables, but didn’t pick it up from the store until right before I made the kebobs. If using bamboo skewers, make sure you soak them in water for at least 30 minutes before putting the meat and vegetables on them. Next, put the meat and veggies on skewers. Leave a little space between things to allow air to flow while cooking.

Unfortunately, it was raining, so I had to broil these in the oven instead of grilling. I was sad to have to do this, but they turned out almost as well. When grilling I usually do 5-7 minutes on once side, then flip to the other side for 5-7 minutes. When broiling I did about 10 minutes on one side, pulled them out of the oven and 10 on the other side. They don’t get the pretty grill marks, but the marinade is super flavorful. Here are the kabobs being pulled out to be turned.

Be careful not to burn yourself.

And the finished product:

YUM! And as always, make a few extra to pack for lunches later in the week:

Sunday, there was last-minute decision to change menu plans from pork tinga to some amazing honey lime fish tacos.  Last time I made the tacos, I didn’t have the energy to run to the store, so we just made do with what we had and topped them with lettuce and avocado.

Well, this time, I did them up right. A little crunchy and tangy goes great with fish. So we had the option of more toppings this time. Red cabbage, cilantro, jalapeno, avocado, limes, and pickled onions.

The recipes of pickled onions I have made before took time. So a quick google seach returned a Bon Appetit result that I knew wouldn’t steer me wrong. With only a little over an hour of pickling time, these were ready just in time for that tacos. Quick pickled onions, indeed!

Mmm mm mmm. I can’t wait to throw these on sandwiches throughout the week! So tasty!